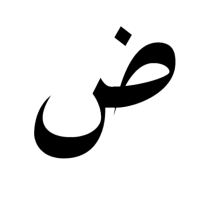 The letter ḍād is the fifteenth letter in the Arabic alphabet. In Modern Standard Arabic, the letter represents a so-called pharyngealized voiced dental stop [dˤ], being a emphatic consonant so typical for the Semitic languages. The letter isn’t however your usual sound, and it’s generally seen as a unique characteristic of the Arabic language. This is less applicable for the letter’s modern pronunciation, which is also attested in some Berber and Songhay languages, but rather with regard to it’s earlier use. Linguists have yet to find a language that features a similar sound. Sībawayh (760-796 AD), author of the first book on Arabic grammar, literally called al-Kitāb, explained the letter’s pronunciation in detail.

According to Marijn van Putten, specialized in the linguistic history of Arabic at Leiden University, Sībawayh describes the letter as being articulated from “(that which is) from between the front of the edge of the tongue and what is on the side of it of the molars is the mukhraj of the ḍād”, mukhraj literally meaning “place of emitting”. Van Putten continues: “The place of articulation ‘along the molars’ is an indication that it is a alveolar lateral consonant; one that is articulated in the same tongue placement as the ‘t’ in English, but with a release along the sides of the tongue (along the molars), which is what ‘lateral’ means. Next, Sībawayh tells us of two categories which somewhat align with ‘airstream’: mahmūsa. and majhūra, placing the ḍād in the latter category, which mostly agrees with ‘voiced and non-turbulent’ (vibrating vocal cords). He then talks about manner of articulation: shadīd (tight) versus rikhwa (slack), respectively plosives and fricatives. Sībawayh puts the ḍād in the category of rikhwa (fricatives). If it had had its modern pronunciation, it wouldn’t have been a fricative (riḫwah), but rather a stop (shadīd). Finally, the ḍād is muṭbaqa (covered with a lid), referring to the backing of the tongue towards the pharynx or velum, better known as emphatic. This description of Sībawayh is very clear and unambiguous.”

The existence of this unique letter, as it was pronounced in earlier times, caused the Arabic language to be known as Lughat al-Ḍād (Language of the Ḍād). The letter subsequently became a symbol for the beauty and richness of the Arabic language, and is regularly used in a literary context. Some people took the ḍād as a symbol of the Arab people as well, connecting the language with its speakers. According to Abū Salama, one of the first generation of Muslims after the prophet Muḥammad’s death, narrated a ḥadīth from the prophet in which he said: “Verily, the Lord is one and the father is but one, and the Arabness in any of you doesn’t come through father nor mother, for it comes through language, and anyone who speaks Arabic is an Arab.”

This narration was however considered ḍaʿīf jiddan (very weak), among others by Muḥammad Nāṣir al-Dīn al-Albānī (1914-1999), a major scholar in the field of ḥadīth. Since the zenith of Arab nationalism after the first World War, the ḍād grew in some cases into a nationalistic symbol representing the proper Arab ethnicity. The letter was featured in this role on the royal emblem of of the Mutawakkilite Kingdom of Yemen (1918-1962), to the left of the coffee bush above the famed Ma’rib dam. The Arab Nationalist Guard is another example. A secular pan-Arab nationalist militia fighting alongside the Syrian regime in the Syrian Civil War, they operate mostly around the capital Damascus and the southern parts of the country. Their emblem features a white Arabic letter ḍād (ض) enclosed by a red and a green crescent on a black background, the so-called pan-Arab colors on which I wrote a separate piece.

For examples and pictures, please visit this thread on my Twitter or this board on my Pinterest.