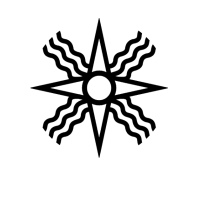 The sun. A heavenly body that inspired people all throughout history since the dawn of mankind. In many polytheistic societies, the sun plays an ubiquitous and essential divine role in the native system of beliefs, often associated with power, healing , growth and light. Some major and well-known solar deities include the ancient Egyptian Ra, the Greek Helios, the Roman Sol or the Celtic Belenus.

Organized astrology in Mesopotamia took shape in ancient Babylonia from as early as 1800 BC. According to Francesca Rochberg in her Babylonian Horoscopes (1998), celestial divination had become a major feature of the learned culture of Mesopotamia by the middle of the second millennium. The sun was previously worshiped as Utu in historical Sumer, “but the isolated references to ancient celestial omens dated to this period are not considered sufficient evidence to demonstrate an integrated theory of astrology.”

The Akkadian and Babylonian cultures after them, however, were skilled astrologers. They associated the sun, the moon and the planets known to them with several gods of their religion’s pantheon to interpret observable events and changes in the sky as divine interventions in their day-to-day lives. The sun and its celestial activities were identified with the god Shamash. Shamash was the name given to Utu in the East Semitic languages, most notably Akkadian, the language spoken in the Akkadian, Babylonian and Assyrian empires. That name is derived from the Akkadian word for the sun, šamšu, which is in turn derived from the proto-Semitic śamš.

Shamash was considered to be the twin brother of the goddess Inanna (Ishtar), the Queen of Heaven. His main temples were in the cities of Sippar and Larsa. Shamash continued to be venerated until the effective decline of the Mesopotamian religion, which would make for a time span of well over 3000 years. He is usually depicted as an old man with a long beard. His main symbol is a star of four points in each of the cardinal directions and four wavy, diagonal lines emanating from between each point, the so-called Star of Shamash. According to Gods, Demons, and Symbols of Ancient Mesopotamia (1992) by Jeremy Black and Anthony Green, the Akkadian name for this symbol was shamshatu (perhaps the combination of šamšu and Utu, i.e. the Sun of Utu). The shamshatu was nearly always featured on the historical kudurru boundary stones, appearing in the first tier of divine symbols alongside the crescent of Sīn and the eight-pointed star of Ishtar. This signifies Shamash’s importance in the Mesopotamian pantheon of gods.

Today, the Star of Shamash or shamshatu, is adopted by the native people of Mesopotamia as an ethnic symbol for their nation. The Star is ubiquitous in modern Assyrian imagery, and is featured on their ethnic flag as adopted in 1971. The predominantly Catholic Chaldean people use a composite symbol on their ethnic flag, containing both elements of the shamshatu and the eight-pointed Star of Ishtar. For many people native to the region, the symbol of Shamash represents both their historical and self-ascribed heritage and continuity.

For examples pictures, please visit this board on my Pinterest.

Omer Sayadi (*1993) is a former student of the Catholic University of Leuven with a special love for the Middle East, North Africa and the Muslim World. After receiving his Master’s degree in Arabic Language and Islamic Studies, his professional work included translation, development and research regarding the region. He occasionally writes on historical and contemporary issues such as Islam in Europe and migration, and started MENA Symbolism as a means of combining everything history, politics, symbolism and society in one place.

2 thoughts on “The Star of Shamash”