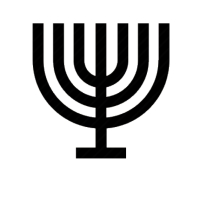 With regard to Judaic symbolism, one could hardly find an older and more characteristic symbol than the so-called menōrah, the six-branched candle stand with a seventh central lamp. Its iconic form is known to adherents of the Bible since at least the Book of Exodus, the concerning passage written around the 5th century BC by the so-called P source, the Priestly code that is one of the four original sources of the Pentateuch. In Exodus 25:31-32, God reveals the design of the menōrah to Moses as part of His instructions for the tabernacle tent that should be built as a makeshift temple for the Israelites. He says: “Make a lamp stand of pure gold. Hammer out its base and shaft, and make its flowerlike cups, buds and blossoms of one piece with them. Six branches are to extend from the sides of the lamp stand; three on one side and three on the other.” God proceeds by saying in Exodus 25:37: “Then make its seven lamps and set them up on it so that they light the space in front of it.”

According to the story of the Israelites’ departure from Egypt, they crossed the Jordan river into the land of Canaan and pitched the tabernacle tent in Samaria in the late second millennium BC, in the ancient town of Shiloh more specifically. After the successful siege of Jerusalem, the city was made into the capital of the Kingdom of Israel and saw the creation of the so-called First Temple. Both the First Temple (until its destruction in 587 BC) and the Second Temple (until its destruction in 70 AD) were lit by a large, gold menōrah daily fueled by fresh olive oil. Its function as a lamp is captured in its name. The Hebrew word menōrah is in fact related to the proto-Semitic root n-w-r (fire). In Hebrew, this is נור (nōr), meaning light. Made feminine by means of the post-fixed ה and prefixed with the particle מ, it denotes a noun of place similar to the Arabic word manāra (منارة), which means lighthouse or beacon. Menōrah would than literally mean lamps-stand, the place that gives light.

The Second Temple in Jerusalem was destroyed by the Romans in 70 AD as a consequence of an ongoing Jewish revolt in the region. Jerusalem was captured, and the Roman legions under emperor Titus sacked and burned much of the city. Among the spoils they brought home to Rome was the menōrah, as could be witnessed on the famous relief on the Arch of Titus in Rome. The lamp stand was displayed in Rome as a symbol of victory over the Jews, and remained there until the Fall of Rome at the hands of the Germanic Vandals in 455 AD. The menōrah’s fate remained since unknown, and although several rumors exist regarding its disappearance, all indicate its irreversible destruction. This influenced later Jewish theological thought, and the Talmudic Menachot 28b indeed states that “a person may not construct a menōrah corresponding to the menōrah in the Temple”, making the original lamp stand an artefact of legendary dimensions.

It should be noted that the menōrah was only visible to the Israelite clergy, as only priests had access to the tabernacle tent and the Temples of Jerusalem. They tended after the lamp stand, refreshed its olive oil daily and lit the candles every night. As a consequence of this privilege, most Israelites didn’t know how the menōrah effectively looked like, except for the passage in Exodus. Several different interpretations with regard to its appearance therefore exist. The famous Andalusian Jewish scholar Maimonides described the menōrah in a manuscript of his Commentary on the Mishna as having straight arms. The most accepted depiction among Jewish scholars however, is the lamp stand being round-armed. This familiar depiction was largely based on the image of the menōrah on the Arch of Titus. Other archaeological evidence, however, confirms this form. During excavations in the ancient city of Magdala, a synagogue was found which contained a rectangular stone, which had on its surface a depiction of a seven-lamp round-armed menōrah. The Magdala synagogue is one of the oldest in Israel, used during the Second Temple period (more specifically between 50 BC-100 AD). That makes the stone carving the oldest depiction of the menōrah, and found a significant distance from Jerusalem where the original stood.

As for the menōrah’s symbolism, that is, just as its name gives away, strongly connected to light. The light given by the gold lamp stand in the tent and the Temples would’ve been a powerful image of God’s light and holiness. In Judaism, the concept of light is very important, the Israelites being called “a light for the nations” in Isaiah 42:6. The connection between the menōrah and God’s holy light is repeated in Zachariah 4, where the prophet asked the angel: “I see a solid gold lamp stand with a bowl at the top and seven lamps on it, with seven channels to the lamps. (…) What are these, my lord?”. The angel replied: “This is the word of the Lord to Zerubbabel: ‘Not by might nor by power, but by my Spirit,’ says the Lord Almighty.” So in the Jewish mindset, the menōrah represents God’s word, God’s light effectively sent out and spread by His Spirit. Today, synagogues hang a lamp in front of the ark. As stated in the Talmud above, it’s forbidden to reproduce the Temple menōrah, so the synagogues use the so-called ner tamid (eternal light) to represent and symbolize the legendary lamp stand, God’s light and His eternal presence.

Based on the Talmud’s prohibition, an exact reproduction isn’t allowed. Many Jewish households use instead other forms of candle stands with five, six or eight branches, or a mere image of the menōrah. This gave rise to the so-called ḥanukkiyah, a nine-branched candelabrum lit during the eight-day holiday of Hanukkah. As it doesn’t resemble the traditional menōrah, it’s completely legal in religious terms and it became as a matter of fact one of the most widely produced articles of Jewish ceremonial art.

For examples and pictures, please visit this board on my Pinterest.