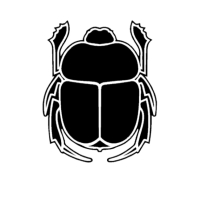 Few would deny that the sun’s visual movement through the sky due to the earth’s rotation is a magnificent and awe-inspiring process. We now know that the sun’s mass is actually of such magnitude that it’s orbital movement is considered merely nominal, i.e. minimal when compared to the huge orbits of other celestial bodies. When we see the sun move from horizon to horizon, which we call “a day”, it’s actually the earth rotating while orbiting around the sun. That fact, however, wasn’t so obvious until a few centuries back. People believed that the sun actually moved around the earth, the latter being the center of existence. Every civilization had its own explanation for this natural miracle, often connected to direct divine involvement.

The ancient Egyptian religion identified the sun with Ra, one of the most important deities in the Egyptian pantheon and mostly represented as a falcon or human figure with a falcon’s head. That being said, however, his primary manifestation was the noon sun, when it was at its highest and brightest position. The evening sun’s manifestation was either the ram-headed god Khnum or Atum, the “oldest of the gods”. The morning sun’s manifestation was the scarab-headed god Khepri, the subject of this piece. Khepri was represented as a human figure with a scarab as head or simply a scarab, a local dung beetle scientifically known as scarabaeus sacer or Sacred Scarab. The symbolization of the morning sun by a scarab isn’t that far fetched actually. The ancient Egyptians made an analogy between the dawn, when the sun seemingly appears out of the dark nowhere, and the scarab’s offspring emerging fully formed from a dung ball’s darkness.

The sun then roles through the sky, as if being pushed by the scarab, who’s known to push around rolling balls of dung over the ground. It’s an interesting observation, especially since it doesn’t feature any supernatural powers, being a mere mythification of a natural occurrence. It’s no coincidence that Khepri’s name resembles the word for scarab. According to James P. Allen in his Middle Egyptian: An Introduction to the Language and Culture of Hieroglyphs (2010), Khepri (ḫprj) is a nominalized use of the active participle of ḫpr (to come into being), so “the one coming into being”. From the same root comes the Egyptian word for scarab, ḫprr.

The deity Khepri was mostly depicted as a scarab, without human characteristics. In these images, he is mostly seen holding the sun, represented as a bright, round disc. Richard Wilkinson mentions in his The Complete Gods and Goddesses of Ancient Egypt (2003) that several papyrus scrolls place him on a barque, an artefact to illustrate his journey through the sky. The scarab holding a red sun disc became the hieroglyphic symbol for Khepri, as seen on a gilded cartouche of a scarab on King Tutankhamen‘s tomb in the Egyptian Museum of Antiquities in Cairo. His representation as a scarab (with or without sun) was a popular image to be found on a wide range of historical artifacts, from talismans and amulets to official seals of monarchs and high-class officials.

From the Middle Kingdom (1938–1630 BC), scarab amulets were fashioned in great numbers. From the New Kingdom (1539–1075 BC) and later onward, small winged scarabs were fastened to the mummy‘s wrappings. Since the scarab symbolized life and birth, i.e. the daily sunset, the Egyptians believed this would helpt to grant the deceased a successful rebirth in the Afterlife. A variation on such winged scarab amulets were so-called “heart scarabs”, small stone figurines of the scarab placed on the corpse’s chest, to symbolize its living heart. The bottom of the scarabs were often inscribed with incantations and invocations, like the Book of the Dead spell 30B. The scarab’s association with the daily rebirth of Khepri gave it a prominent role in funerary contexts.

However, amulets weren’t the biggest group of scarab artifacts found. That role goes to the seal type of scarab, the most common of scarab objects. Many clay seals have been found attesting to this use, the most valuable ones being those that bears royal names. These ranged in date from the 11th dynasty Egypt to the Late Period (so roughly 2130-223 BC). These seal were probably not used as amulets, but more in an official context. Official seals or badges of office, for example, or royal gifts inscribed with the monarchic title. Many may simply have been made privately in honor of a ruler during or after his lifetime. The same could be said about rings with cast scarabs typical for the New Kingdom (1550-1069 BC). An enamel and ceramic signet seal ring found at the Louvre Museum, for example, bears the cartouche of Pharaoh Tutankhamen (1334 – 1325 BC) and features in the middle a scarab holding the sun orb.

At times, though less often, Khepri is anthropomorphized as a human with a scarab as head. He occasionally holds an ankh, the symbol of life. He can be seen with other human-like deities on board of a barque, defeating the serpent Apopis in the Book of the Dead of Imenemsauf, written during the 21st and 22nd dynasties (1069-716 BC) and now in the Louvre Museum. Apopis was bent on swallowing the sun, each night batting with the sun god Ra, who subdued him in order to ensure the next dawn. Khepri can also be seen in human-like form sitting on a throne as seen on one of the walls of queen Nefertari’s tomb (QV66). Interestingly, Nefertari (d.1255 BC) was referred to by her husband Ramses II as “the one for whom the sun shines”, as mentioned by Kenneth Kitchen in his Ramesside Inscriptions, Translated & Annotated, Translations v.II (1996).

For examples and pictures, please visit this thread on my Twitter or this board on my Pinterest.

Do you like my work? Feel free to buy me a coffee to support my efforts or become a member to access exclusive content like maps, in-depth longreads on specific symbols and a look at non-MENA symbols. Thank you.